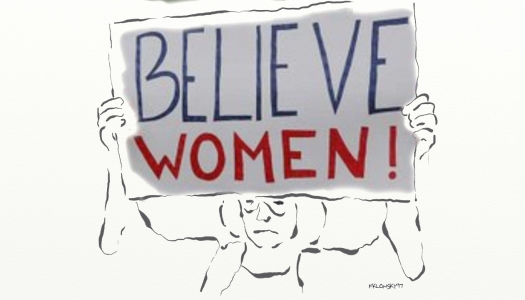 This Psalm of Protest is to be “sung by brave women with a chorus of honest men.” It was inspired by the bravery of Dr. Christine Blasey Ford testifying before the Senate, and that of Ana Maria Archila and Maria Gallagher confronting Sen. Jeff Flake in a Senate elevator. The psalm alludes to both Dr. Ford’s testimony and the moment when Ms. Gallagher tells Sen. Flake to look at her. See also “Psalms of Protest 1, 2 and 3,” “Psalms of Protest 4, 5 and 6” and “Psalms of Protest 7 to 10.”

Psalm of Protest 11: #MeToo, No More
A psalm of protest,
Sung by brave women,
With a chorus of honest men.

Brave Women: What willful ignorance!
What blatant deceit!
That you in the halls of power detest us with disbelief.
That you loath us with scorn.

Honest Men: We believe.
We know.
We have been silent too long.

Brave Women: What arrogant pretense!
What feigned sympathy!
That you in the halls of power
Dismiss us with false words of feigned understanding.

We have been raped,
Fondled, pushed, grabbed, groped,
Forced into corners,
Forced onto beds,
Drugged into submission,
Abused, beaten,
Left cold and alone.
Look into my eyes when I speak.

Honest Men: We believe.
We know.
We have been silent too long.

Brave Women: We tremble, terrified,
The trauma seared indelibly into the hippocampus,
The laughter and the disdain,
The violence and the anger,
The violation and the abandonment.
We demand to be heard.
We demand to be seen.
We demand justice from halls of power.

Join us, brave women.
Join us, honest men.
Together, in one voice, declare:

Brave Women: And we will lead the way.

Postscript: The call of justice is not enough. Men and women must be part of co-creating a better world, a world with no space for sexual assault, emotional degradation, personal harassment or rape.