In a wonderful confluence of circumstances, the first night of Chanukah this year (2008/5769) falls on the winter solstice (for those of us in the northern hemisphere). December 21 is the longest night of the year, marking a day when the sun’s path is as low, as southerly and as scarce in its heavenly trek as it ever is.  But it is also at this very moment that the darkening journey halts, turns, and moves upwards toward greater and longer hours of light again.

Three months later, the next significant solar event occurs: the sun reaches its vernal (spring) equinox. While we know that time as March 21, the rabbinic calendar celebrates the equinox on April 8. That is the moment of Birkat HaChammah, Blessing of the Sun.

This year, we have a heightened sense of the quarterly landmarks of the sun’s annual journey, which is why the coincidence of the winter solstice and the first night of Chanukah is so appealing.

We offer the following ideas for a special addition to this year’s Chanukah celebration, connecting this moment of the solstice with the moment of the equinox, when we can mark the birthday of the sun, a once-in-three-decades moment.

This year, for the first light, let olive oil light up the night. The Chanukah story, after all, celebrates the miracle of one little cruse of pure olive oil lasting well beyond its anticipated lifespan. While paraffin and other oils may be fine for other nights, and other years, on this night, this year, light olive oil. Olive trees are sturdy and long-lived. They thrive in the Mediterranean, and throughout the land of IsraelLit. ''the one who struggles with God.'' Israel means many things. It is first used with reference to Jacob, whose name is changed to Israel (Genesis 32:29), the one who struggles with God. Jacob's children, the Jewish people, become B'nai Israel, the children of Israel. The name also refers to the land of Israel and the State of Israel.. They represent longevity, health, renewal, peace. Two trees in the Galilee have been judged to be 3,000 years old, old enough to have possibly given fruit for the oil in the Temple in JerusalemLit. City of peace From the time of David to the Roman destruction, Jerusalem was the capital of Israel and the spiritual and governmental center of the Jewish people. During the long exile, Jews longed to return to Jerusalem and wrote poems, prayers, and songs about the beloved city. In 1967, with the capture of the Old City, Jerusalem was reunited, becoming "the eternal capital of Israel." Still, the longing for peace is unfulfilled..

Choose a sturdy bowl – for we are told that the firmament of the heavens, the raki’a, was forged like an upside-down bowl, separating the upper waters from the lower waters. And the sun was hung there.

Fill the bowl 2/3 with water. Then pour a thin layer of olive oil on top. (The more oil, the longer the light will burn.) Soak a small ball of cotton or the end of a cotton swab in the oil, then remove the tip. Pinch and lengthen one end, and place the cotton in the middle of your bowl. This will serve as your wick.

When lit, the bowl will glow the soft colors of a new sun, floating in firmament.

Recite the blessings over the lighting of the light.

[Modification: Kolot translations and alternative feminine God-language are provided, along with the traditional.]

Praised are You God, Source of Life, who makes us holy through your commandments and commands us to light the Hanukah candles.

Praised are You God, Source of Life, who performed miracles for our ancestors in their day at this season.

Praised are You God, Source of Life, who keeps us alive, sustains us, and brings us to this moment.

And then recite the following:

“Who is she that breaks forth like the dawn?” (Song of Songs 6.10)  One midrashA rabbinic method of interpreting text, often through the telling of stories. explains:

Rabbi Hiyya bar AbbaFather and Rabbi Shimon ben Halafta were walking early one morning in the valley of Arbel. They saw the first rays of light breaking on the horizon. Rabbi Hiyya turned to Rabbi Shimon and said: “This is the way redemption comes.” Rabbi Shimon turned to Rabbi Hiyya and said: It is written, “Though I sit in darkness, the Lord is a light for me” (Micah 7.8) At first, the light comes little by little. Then it scatters and brightens, then it multiplies and shines forth, and afterward it is continually exalted. [MidrashA rabbinic method of interpreting text, often through the telling of stories. Tehillim (Buber) Psalm 22.13]

May this be the dawn of a new era of light. May this little flame help us brighten, and enlighten, the world.

It has become customary to give gifts on Chanukah. On this night when we celebrate the miracle of energy and the life-sustaining gift of the sun, let us share our bounty. One option is to purchase solar-cookers for Darfurian women. These women who have already fled their homes, wander the desert for wood scraps to cook – putting their lives and bodies in danger. Donations of solar cookers allow them to access the abundant energy from the sun. To purchase solar cookers for Darfurian women in need, click here. 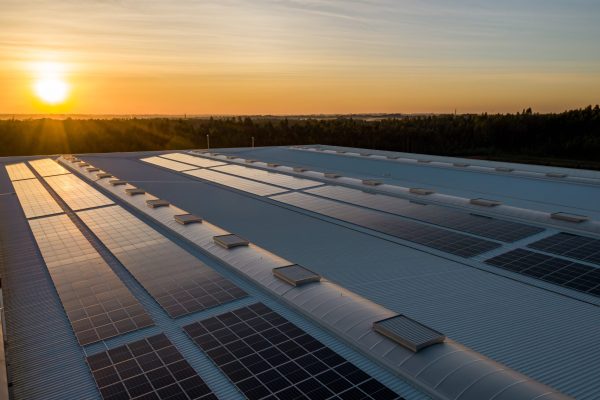 Blessing for the Dedication of Solar Panels