This ritual was created as part of a ritual theater event called “KapparotAn atonement ritual done prior to Yom Kippur. Among certain hassidim, a live chicken (who metaphorically has had transferred to it the family's sins) is swung around the head of its owner before being slaughtered . Today, some Jews swing a bag of money in a alternative kapparot ritual and give the money to charity as a sign of atonement.,” which took place on September 15 and 17, 2016, in Philadelphia. The event was conceived by Chana Rothman and Rabbi Annie Lewis. Hila Ratzabi collaborated on creating this ritual for the event. The traditional “Al Het” confessional prayer on Yom KippurThe holiest day of the Jewish year and the culmination of a season of self-reflection. Jews fast, abstain from other worldly pleasures, and gather in prayers that last throughout the day. Following Ne'ilah, the final prayers, during which Jews envision the Gates of Repentance closing, the shofar is sounded in one long blast to conclude the holy day. It is customary to begin building one's sukkah as soon as the day ends. is a chance for the community to confess their sins together. This ritual, which can be performed during the month of Elul or during the high holidays, asks participants to think differently about guilt, to think about guilt that is placed on us by outside forces. In this ritual, we place our guilt on stones and, one by one, let it go. The full event included live music and poetry. You will need at least two people to lead this ritual.

Blank strips of paper and pens (enough for all participants)

Stones (enough for all participants)

We began with a song and reciting our own confessional poems. Leaders might choose to share their own confessions here, or share poems or writings on confession by other authors. This sets the mood for participants to start reflecting on their own relationships to guilt. See the poem, “Kapparot,” by Rabbi Annie Lewis as an example.

Introduction to the ritual

Hand out blank strips of paper and pens to participants.

Leader: The traditional Al Het'For the sin ...'' – the litany of sins for which Jews ask forgiveness during Yom Kippur services. confessional prayer is recited in the plural, as a collective confession which includes all kinds of sins. One reason for this is to cast a wide net to include every possible sin, both those we are aware of and those we are unaware of, and to include people who may not have the ability or awareness to ask for forgiveness. In our deconstructed group confession, we are adding another layer of confession, for guilt that perhaps we should never have taken on, for guilt that has been placed on us by an outside force (for example, patriarchy!).

Let’s turn guilt on its head. Think of something you feel guilty about that maybe you shouldn’t, that maybe came from somewhere outside yourself, guilt that you carry that might not serve you. Start your confession with the phrase “For the sin of…”

Examples: “For the sin of not exercising enough”

“For the sin of not buying organic food”

After participants have written down their “sins,” collect the strips of paper. Tape each strip on a stone. Places stones all around the room.

Note: This part will likely take a bit of time, especially in a large group. This is a good time for the other leader to lead the group in song (we used the traditional “ashamnu” niggunA wordless melody.). We also led a group conversation on the nature of guilt and scapegoating in society.

After the singing/conversation comes to a close, instruct participants to choose a stone from the floor.

Leader: We are now going to release ourselves from our guilt and put healing intentions onto these stones. One by one, participants will come up to the front of the room and read the confession you received on your stone. Hold it for a moment and imagine sending healing energy to this phrase, knowing that the anonymous author of this confession is here in the room. Then say, “I release you…” as you place the stone and strip of paper into the bowl of water. Watch the ink of the confession dissolve.

End with a poem and/or song. We read “The Journey,” by Mary Oliver. 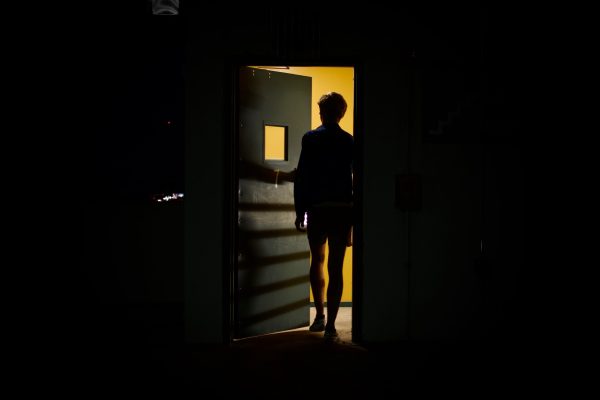