Traditionally, prior to the wedding, the groom veils the bride. This custom harkens back to at least two biblical sources: 1. RebeccaThe second Jewish matriarch, Isaac's wife, and mother to Jacob and Esau. Rebecca is an active parent, talking to God when she is pregnant and learning the fate of her children, then ultimately manipulating Isaac and the children to ensure Jacob's ascendancy. Her Hebrew name is Rivka., prior to meeting IsaacAbraham and Sarah's much-longed-for son and the second Jewish patriarch. Isaac is nearly sacrificed by his father at God's command (Genesis 22). He is married to Rebecca and is the father of Esau and Jacob. His Hebrew name is Yitzchak., veils herself as a sign of modesty; 2. although JacobLit. heel Jacob is the third patriarch, son of Isaac and Rebecca, and father to the twelve tribes of Israel. More than any of the other patriarchs, Jacob wrestles with God and evolves from a deceitful, deal-making young man to a mature, faithful partner to God. His Hebrew name is Yaakov. intended to marry RachelLavan's younger daughter and Jacob's beloved wife second wife (after he is initially tricked into marrying her older sister, Leah). Rachel grieves throughout her life that she is barren while Leah is so fertile. Ultimately, Rachel gives birth to Joseph and dies in childbirth with Benjamin. Rachel is remembered as compassionate (she is said to still weep for her children), and infertile women often invoke Rachel as a kind of intercessor and visit her tomb on the road to Bethlehem., he was tricked by his father-in-law, Lavan, into marrying LeahThe third of the Jewish matriarchs, Lead is the eldest of Lavan's daughters and one of the wives of Jacob. She is the daughter whom Lavan tricks Jacob into marrying instead of his younger daughter Rachel, whom Jacob has requested to marry. Leah is mother to six of the the twelve tribes and to one daughter, Dinah., Rachel’s older sister. So the groom, prior to veiling the bride, ascertains that he has the right woman. At an Orthodox wedding, the groom will typically be danced by male friends to the bride who sits on a throne-like chair awaiting his arrival. The men come in whooping and singing, and the bride is veiled.

Although this custom had fallen into disuse outside of Orthodox circles, it is making a comeback. The veil has accrued new interpretations—as a recognition of the holiness and awe-filled nature of the moment, as a sign of the preciousness of the bride and groom to each other and as a symbol of God’s protective presence. Many couples have chosen to make this ritual more egalitarian by clothing one another—the groom veils the bride while she helps him into a kittelA white robe in which one is buried. Also worn at Passover, on Yom Kippur, and at one's wedding as a symbol of rebirth. (groom’s robe) or places a special kippahA small cap, traditionally worn by men, symbolizing humility before God. Although women traditionally covered their heads with a scarf or hat as a sign of modesty, today, some women wear kippot as well. (yarmulkeYiddish for kippah (Hebrew), the small cap traditionally worn by Jewish men and now also by some women. It is worn to show respect to God. Some cover their heads all the time; some only do so during prayer and Torah study.) on his head. If the couple observes the custom of not seeing each other for a few days prior to the wedding, the bedecken is usually the first time they see one another at the wedding—it is often emotionally charged and very beautiful. Still, some women eschew the veil because of its negative resonance.

What to Expect at a Jewish Wedding Ceremony 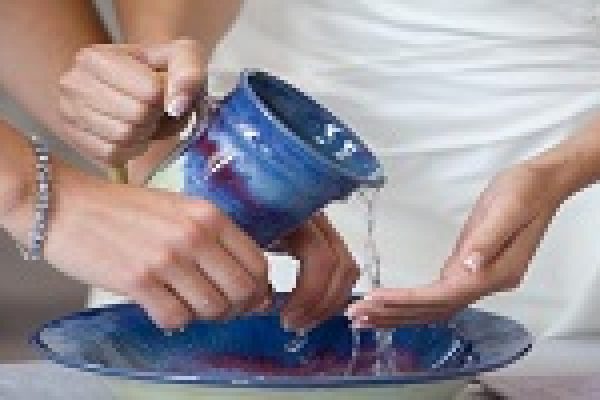