Building queer family is an act of resistance.

I cannot stop looking at this art, made by Megan J Smith of the Repeal Hyde Art Project. Three purple figures hold hands, raising their arms in fists under the bright orange word: RESIST. Their feet hover over the caption: BUILD MORE QUEER FAMILIES. 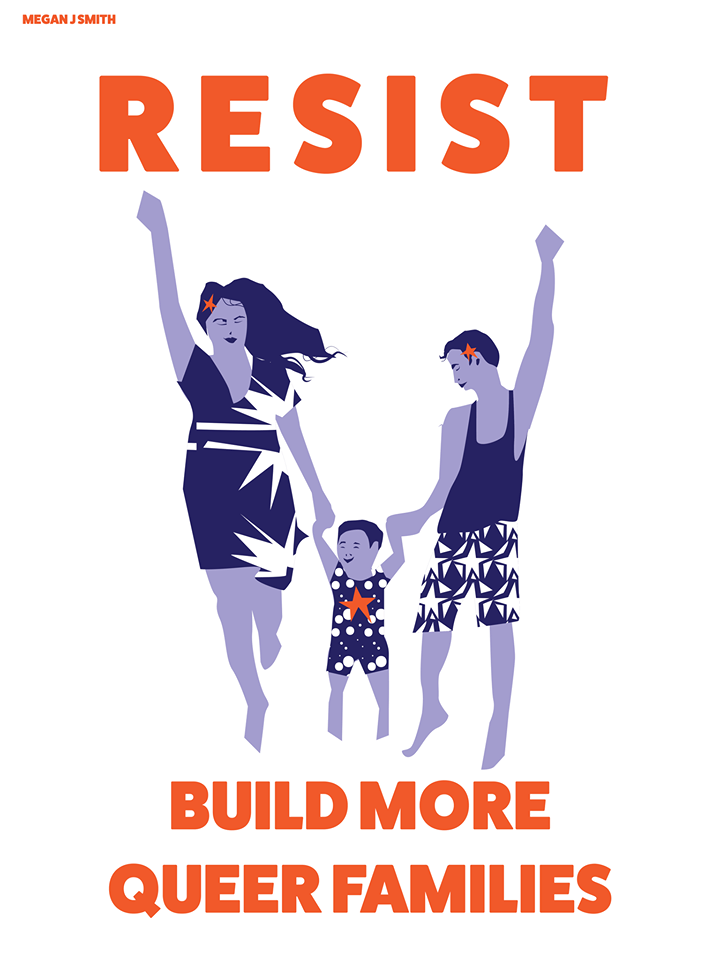 Now, as always, it is an act of resistance when those who are systematically targeted instead thrive.

This past week we sat next to ShifraShifra is one of the two Hebrew midwives mentioned in Exodus 1 who refuses Pharaoh's orders to kill the boy children, instead enabling them to live. She, along with her partner Puah, is instrumental in beginning the process leading to the Exodus. Shifra is often identified as Jochebed, Moses' mother. and PuahPuah, like Shifra, is one of the Hebrew midwives mentioned in Exodus 1 who defies Pharaoh's orders to kill the boy babies. This first act of defiance was instrumental in leading to the Israelite exodus from Egypt. Puah is often identified in the midrash with Miriam, Moses' older sister. in services, ancestors who midwife’d in Israelite baby boys despite the order from the state to prevent the birth and health of such babies. These women resisted the attempted extinction of the Israelite people through their means of reproduction.

What is queer family? To me, it is the holy convocation of a group of friends and lovers who have found each other—sometimes it’s a moment where you ask the other, “don’t I remember you from SinaiAccording to the Torah, God, in the presence of the Jewish people, gave Moses the Torah on Mount Sinai (Har Sinai).?” “Haven’t I known you my whole life?” It is a hub of people who commit to each other, who care for each other, who celebrate together, who hold loss together, who thrive on each other’s thriving. Some queer families live together, or see each other rarely. Some queer families are partners raising children, and some are just like every other family: full of connections and reconnections and renegotiation of relationships over the course of a life together.

Building queer family is an act of resistance.

The Babylonian TalmudThe rabbinic compendium of lore and legend composed between 200 and 500 CE. Study of the Talmud is the focus of rabbinic scholarship. The Talmud has two versions, the main Babylonian version (Bavli) and the smaller Jerusalem version (Yerushalmi). It is written in Rabbinic Hebrew and Aramaic., Niddah 31a teaches:

“Our rabbis taught, there are three partners in [the creation of] man. The Holy One of Blessing, his father, and his mother. His father brings forth white seed that produces bones, nerves, nails, the brain in his head and the white in his eye. The woman brings forth red seed which produces skin, flesh, hair, and the dark of the eye. The Holy One of Blessing gives the spirit, the soul, the personality of the face, the sight of the eye, the hearing of the ear, the speech of the mouth, the locomotion of the legs, understanding and wisdom. When the time comes to part from this world, the Holy One of Blessing takes His portion and the part of the mother and the father are laid before them.”

This is a proving ground for the beauty and potential in chosen and queer family. While not every queer family system includes children, the ones that are responsible for raising them all contribute different parts to the conception and essence of that child.

A child raised with godparents who care about theater, who call them once a week on ShabbatShabbat is the Sabbath day, the Day of Rest, and is observed from Friday night through Saturday night. Is set aside from the rest of the week both in honor of the fact that God rested on the seventh day after creating the world. On Shabbat, many Jews observe prohibitions from various activities designated as work. Shabbat is traditionally observed with festive meals, wine, challah, prayers, the reading and studying of Torah, conjugal relations, family time, and time with friends.. A child who’s uncle is also their biological father, who takes them to soccer games.
A child raised with grandparents who are not related by blood to any of the parents, but dote upon this new baby.

It takes a lot of players to help create a being, to raise a person.

Our rabbis teach that there are three partners in the creation of a person, two humans who bring the biological materials, and the Divine essence who supplies the rest. This sugya from Niddah 31a has the potential to blow up the image that one must be biologically related to a child to have a stake in their creation. God, who supplies the soul, the personality, provides invaluable parts of a new beings life, without genetic relation.

Our tradition further compels us to see non-genetic reproduction as a holy act. In MishnahThe first layer of Jewish oral law, written down in Palestine around 200 CE. The Mishna consists of six books or sedarim (orders), each of which contains seven to twelve tractates or masechtot (singular masechet). The books are Zeraim (Seeds), Moed (Festival), Nashim (Women), Nezikin (Damages), Kodashim (Holy Things), and Tehorot (Purities). Bava Metzia 2:11 we learn that one’s teacher achieves a higher status of respect than one’s parent:

“… his father brought him into this world, but his teacher, who taught him wisdom, brings him to live [in] the world to come.”

The Rambam continues in the Mishneh TorahThe Five Books of Moses, and the foundation of all of Jewish life and lore. The Torah is considered the heart and soul of the Jewish people, and study of the Torah is a high mitzvah. The Torah itself a scroll that is hand lettered on parchment, elaborately dressed and decorated, and stored in a decorative ark. It is chanted aloud on Mondays, Thursdays, and Shabbat, according to a yearly cycle. Sometimes "Torah" is used as a colloquial term for Jewish learning and narrative in general. to explain that when one’s teacher dies, one must mourn for them in the same way that one mourns their parent, with all the particular stringencies one observes for a parent. There are many ways to create and to sustain life, and very few of them have to be biological.

There are many ways to experience the loss of life, and very few of those ties have to be biological.

In February’s upcoming episode of KaddishThe Aramaic memorial prayer for the dead. Mourners recite this prayer at every service, every day, in the presence of a minyan (prayer quorum) over the course of a year (for a parent) or thirty days (for a sibling or offspring). The prayer actually makes no mention of the dead, but rather prays for the sanctification and magnification of God's name., as we explore queer reproductive loss, it is clear the ways in which directly and indirectly impacted parties are made to quell or quiet their loss.  We’ll be exploring queer reproductive loss how reproductive loss impacts queer people, the role of reproductive technology, and how a reimagined family and the porous borders it can have broadens our understanding of who is impacted by reproductive loss.

We’ll be joined by Pastor Naomi Leapheart, Faith Work Director of the LGBTQ Task Force and professor at Villanova University. She brings teachings on the ripples of reproductive loss—just how many different people and generations are impacted. Naomi also discusses how one’s own inability to become pregnant creates non-traditional experiences of reproductive loss, and grief at the loss of potential.

Ariana Katz is the host of Kaddish, a podcast about death, mourning, and the people who do it. Ariana is a rabbinical student at the Reconstructionist Rabbinical College in Philadelphia. She is a member of the Philadelphia Reconstructionist Chevra Kadisha, a volunteer chaplain and board member at Planned Parenthood of South East Pennsylvania, and a member of the Jewish Voice for Peace Rabbinical Council. Ariana is in training to become a soferet, a scribe of sacred Jewish text.

Get the latest from Ritualwell delivered to your inbox.